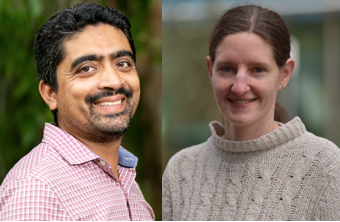 The QCIF Bioinformatics team is expanding due to increased demand this year. Four new staff have joined the team, with five more positions to be advertised soon.

Ahmed joined QCIF in January as a Senior Biostatistician. Currently, he will continue his work of the last six years providing biostatistics support to researchers at the University of Queensland’s Diamantina Institute. He will also support QCIF’s other members and partners as well as help deliver QCIF’s biostatistics training program.

“Ahmed’s strong background in biostatistics and bioinformatics and his experience in microbiome, RNA-seq and single cell analysis is a great addition to the QCIF biostatistics team,” said QCIF Head of Statistics Dr Anne Bernard.

“Ahmed has already contributed to establishing important collaborations and projects requiring his skills for the analysis of data generated by new technologies and methods such as Digital Spatial Profiling.”

Ahmed is appointed to QCIF through the Diamantina Institute and is part of the UQ Faculty of Medicine’s Research and Statistical Support Service led by Associate Professor Jason Ferris.

Sarah joined QCIF in May as a Senior Bioinformatician. She will work with the Galaxy Australia (bioinformatics platform) and Web Apollo (genome annotation platform) teams to help develop best-practice workflows for single-cell RNA-seq (Galaxy) and gene model curation (Web Apollo).

Sarah also supports researchers at Griffith University, splitting her time between the Griffith Institute for Drug Discovery at Nathan and the Menzies Health Institute Queensland on the Gold Coast.

She is participating in Griffith’s Hacky Hour, which resulted, almost immediately, in QCIF seeing increased user support requests, showing that the university’s researchers are taking advantage of Sarah’s presence and knowledge.

Sarah joined QCIF from Monash University where she spent the last five years working at its bioinformatics platform. Before that, she was with QCIF Bioinformatics’ predecessor, the Queensland Facility for Advanced Bioinformatics (QFAB), for more than two years.

Callum joined QCIF in June as a casual Data Scientist. He is working with the team to support QCIF Member researchers with statistical analysis and data visualisation using software such as Power BI and Python.

He is also currently continuing his role as an Assistant Research Technician for UQ’s Molecular Dynamics Group and the UQ Faculty of Medicine’s Research and Statistical Support Service, a position he has held since January this year at the former, and since February 2019 at the latter.

“Callum brings an impressive range of programming, data analytics and visualisation expertise to the team,” said QCIF Senior Health Informatician Mark Hoffmann. “His knowledge of data science, particularly within health research, is highly regarded and makes him a valuable addition to the QCIF team.”

Callum is in his final year of studying dual Bachelor degrees in Science and Mathematics, majoring in Biophysics, Data Analytics and Operations Research.

Cameron joined QCIF in June as a Bioinformatician and Software Developer based at USC to assist the university’s researchers and to support QCIF’s involvement in national software platforms. Read our previously published article about his appointment.