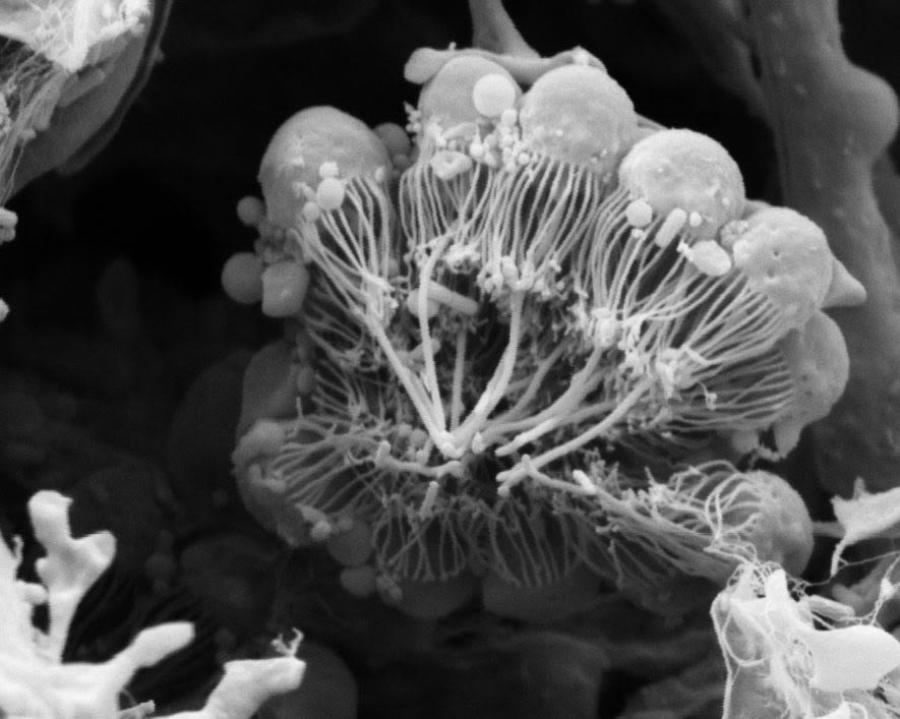 A significant University of Queensland evolutionary discovery published in Nature has had the helping hand of QFAB for the last four years.

QFAB Database and Systems Administrator Nick Rhodes spends about one day a week working with the Degnan Marine Genomics Labs, with half of that day embedded within the research group.

“I do all the IT wrangling—creating accounts, advising students, installing and updating software, handling data storage and just generally ensuring that everyone has the resources they need to analyse their data,” said Nick.

“When we get new members in the lab, I usually tell them that it’s my job to make sure that they can do their job.”

The Nature paper, published in June this year, acknowledges Nick’s support for “assistance with computing and database management.”

The paper upends biologists’ century-old understanding of the evolutionary history of animals.

“We’ve proposed that the first multicellular animals probably weren’t like the modern-day sponge cells, but were more like a collection of convertible cells,” Professor Degnan said.

“The great-great-great-grandmother of all cells in the animal kingdom, so to speak, was probably quite similar to a stem cell.

“This is somewhat intuitive as, compared to plants and fungi, animals have many more cell types that are used in very different ways—from neurons to muscles—and cell flexibility has been critical to animal evolution from the start.”

The team sequenced all of the genes expressed in individual cells, allowing the researchers to compare cell types over evolutionary time.

Fellow senior co-author Professor Sandie Degnan said this meant they could tease out the evolutionary history of individual cell types, by searching for the ‘signatures’ of each type.

“Many biologists for many decades believed the existing theory to be true, as sponge choanocytes look so much like single-celled choanoflagellates—the organism considered to be the closest living relatives of the animals,” she said.

“But their transcriptome signatures simply don’t match, meaning that these perhaps aren’t the core building blocks of animal life that we originally thought they were.

“This single cell sequencing technology has been used in the last few years, but it’s helped us finally address an age-old question, discovering something completely contrary to what anyone had ever proposed.

“We’re taking a core theory of evolutionary biology and turning it on its head,” she said.

“Now we have an opportunity to re-imagine the steps that gave rise to the first animals, the underlying rules that turned single cells into multicellular animal life.”

Professor Bernie Degnan said he hoped the revelation would help us understand our own condition and our understanding of our own stem cells and cancer.

Husband-and-wife team Professors Bernie and Sandie Degnan decided having a QFAB bioinformatician embedded in the Degnan Labs would be an excellent research support model.

“Nick’s role as an ‘enabler’ has been hugely important to the success of this research. He has been essential for managing our large databases and improving their accessibility, for responding to constant requests to install diverse software packages, and for guiding new students through the complex and unfamiliar terrain of high-performance computing,” said Professor Sandie Degnan.

“With Nick’s patient help, we see students transition from intimidated and computationally-naïve to bioinformatics-capable in just a few months.”

Nick added: “The researchers are a bunch of very talented biologists whose computer skills often don’t extend to the Linux command line.

“When they get into the analyses, I install and upgrade the software but also advise on the computational requirements—and if necessary direct them to HPC resources, such as QRIScloud and Awoonga.”

The group has Nectar virtual machines (VMs) that are attached to QRIScloud storage (QCIF’s cloud compute service) but these VMs are not appropriate for genome assembly.

“I spent a lot of time moving data (and results) between group resources and HPCs, plus it’s also important to facilitate data transfer between the authors in a timely manner; recent past lab members are now in the USA, UK, Mexico, Austria, Chile, as well as Australia,” said Nick.

One of the trickiest, but most enjoyable, aspects of Nick’s work for the Degnan Labs was the deployment of Web Apollo, a Web-based genome browser used to host the genomes the researchers analysed.

“This was challenging for me, coming from a very non-visual command line background, but was immensely valuable to the senior authors as it provides a graphical overview, hiding the multiplicity of bioinformatic detail. It also makes the data available to the world.”

Nick’s work isn’t the only QFAB connection to the Degnan Labs’ Nature paper—the authors cite a paper by Kim-Anh Lê Cao from when she was a QFAB research biostatistician.

The collaboration between QFAB and the Degnan Labs is ongoing. Other Degnan Labs projects that QFAB is supporting include an elucidation of sea squirt genome for biotechnological applications and analysis of the crown-of-thorns starfish (COTS) genome for biocontrol technologies.

COTS feed on coral and in plague proportions they can devastate hard coral communities. The Degnan Labs is looking to develop biological agents for its control on infested regions of the Great Barrier Reef.