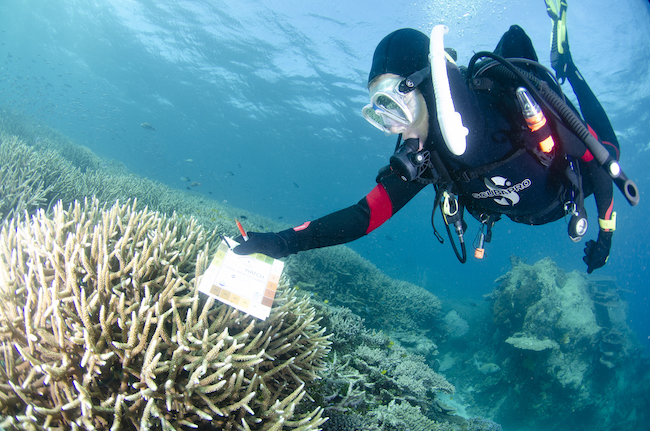 QCIF has played a key role in ensuring Australia’s global CoralWatch citizen science platform is user friendly for both scientists and non-scientists alike.

CoralWatch plays a vital role in the collection of field data to determine the health of coral reefs worldwide, including Australia’s Great Barrier Reef, in the face of climate change and bleaching events.

After almost 20 years of operation, CoralWatch’s platform needed a major upgrade. Its University of Queensland-based project team partnered with QCIF and the Atlas of Living Australia (ALA) this year to find a solution.

QCIF’s Software Solutions team customised ALA’s BioCollect field data collection platform as a replacement for CoralWatch. They enhanced its data visualisation functionality by developing new code to display graphs for quick analysis and added other new features, such as the ability to upload photos, filters for easy data access, and record verification.

The new graphs feature was received so well that it has been extended across the BioCollect platform.

All historical data (almost 15,000 reef visits and more than 320,000 coral observations) were imported from CoralWatch’s old data portal to its new one.

Since the new portal’s launch on 28 September 2021, more than 220 surveys have already been entered by divers and snorkellers worldwide. About half are from Australia, the other half from Thailand, Honduras, Taiwan, Northern Mariana Islands, Indonesia and Egypt.

First mooted in 2019, grant funding from the partnership between the Australian Government’s Reef Trust and the Great Barrier Reef Foundation — with ALA’s in-kind support — made it possible to proceed with the CoralWatch Data Portal’s major upgrade this year.

CoralWatch Education Project Manager Diana Kleine approached QCIF earlier this year following a recommendation from ALA. QCIF has been collaborating with ALA on BioCollect since 2019 through customising a version of BioCollect for the Queensland Government’s Office of the Great Barrier Reef (OGBR).

“To receive the optimum amount of data from our volunteers, it is essential that the [CoralWatch] database is user friendly and self-explanatory. The platform needs to be mobile compatible, and it should not require much effort to upload your data,” said Diana.

“CoralWatch likes to provide direct feedback to users about their survey, showing graphs that are easy to understand for non-scientists.

Amber Moran, a diving instructor and CoralWatch Ambassador, praised CoralWatch’s new data portal: “Overall, I think there are some sensational features and it’s a great database to use. I really love that surveyors can upload images, including for each coral.”

Troy Lockett, head of QCIF’s Software Solutions team, said: “QCIF is grateful that we were able to assist CoralWatch in porting the site across to a new platform. By integrating CoralWatch into ALA’s BioCollect platform, it has provided a stable and sustainable platform to collect and share vital data about the health of reefs around the world.”

ALA, hosted by CSIRO, will provide ongoing maintenance for the CoralWatch portal.

The new database will be able to cope with the growing data storage needs of the CoralWatch project.

“CoralWatch will continue the effort to reach more people that are willing to act to protect coral reefs,” said Diana.

“The biggest threat to reefs is climate change and the biggest thing we all can do is reduce carbon emissions. Get involved in the program to learn more, become a citizen scientist or start saving reefs from home. Anyone can get involved — come join CoralWatch!”